Dicky Eklund (Christian Bale) is followed around by a documentary camera crew which Dicky believes is out to capture his pending comeback as a pro welterweight boxer.  It has been fifteen some-odd years since Dicky's big spotlight moment knocking out Sugar Ray Leonard in 1977.  Dicky hits the crack pipe and schpiels for the camera about the past big times, but gets distracted, “Yeah what was I saying?” and while Dicky figures it out, the doc filmmaker reminds the people in the room that this movie is about the effects of drug addiction, not a comeback story.


Viewership is continuously indulged by showing one thing as another.  As The Fighter opens, Mickey Ward is raking the pavement of downtown Lowell, Massachusetts.  Dicky’s jabs enter the frame like piston works, huffing and quick.  The movie camera then turns to the documentary camera - the brothers are being filmed being filmed.  "How You Like Me Now?" by The Heavy kicks in (which, like The Fighter, samples the past), and from the opening bell David O. Russell has the audience up against the ropes. 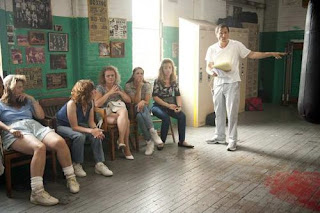 On Charlie Rose, O. Russell drew attention to the “movie-within-a-movie” aspect of the story, as a play on both the audience and the characters.  O. Russell likes to throw his cast into the maelstrom, as when the sisters follow Ma Ward (Melissa Leo) in a mad predatoress frenzy to the house of their arch enemy, Mickey’s wife, Charlene (Amy Adams), who is foxy but no MTV girl.  Charlene's salty spitfire draws deep from the bruised brawn of Lowell, Mass, the "birthplace of the Industrial Revolution."  This history of the city - a booming 19th century textile superpower now neglected and afflicted - is summarized in the introduction to the movie-within-a-movie, which screens at the prison, and a gloating Dicky sits next to a stocky granite-browed psycho who looks like he used to hang out at Tool's Tattoos in The Expendables.

The crux of the movie is the Sanchez v. Ward fight, a sequence told by a series of removed perceptions.  Dicky is on the prison pay-phone and relayed the action from Ma Alice Ward back in Lowell, who watches the fight broadcast from Las Vegason on TV.  Dicky updates the fellow prisoners who crowd in clusters behind the jail bars, eager for any hint of entertainment.  These inmates are the movie audience, getting off on the degrees of reality filtered through a chain of voices, at a distance locked in time and space from the actual events, but raucously intimate.  Film quill-cruncher J. Hoberman indicates that, "Dicky may have been the subject of an HBO America Undercover doc (High on Crack Street: Lost Lives in Lowell), but... the whole family is living a reality show—their domestic drama played out in full view of friends and neighbors.” 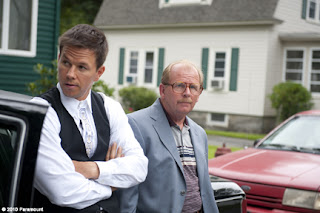 The family has a habit of singing pop songs to each other when words would seem to degrade the bout of issues at hand.  Ma Alice Ward finds Dicky ashamedly jumping out the 2nd floor window, and as she ushers him into the car, the pariah calms her with a faulty acapella version of The Bee Gees "I Started A Joke," and after Ma joins in the chorus no more dialogue is needed.  As Dicky and Mickey emerge from the locker room into the arena for the climactic Neary v. Ward fight, they mumble the words to "Here I Go Again," the 80s classic by Whitesnake. The pugnacious soundtrack jumps between decades the same way the movie veers between between truth and fiction, from The Breeders to Traffic.